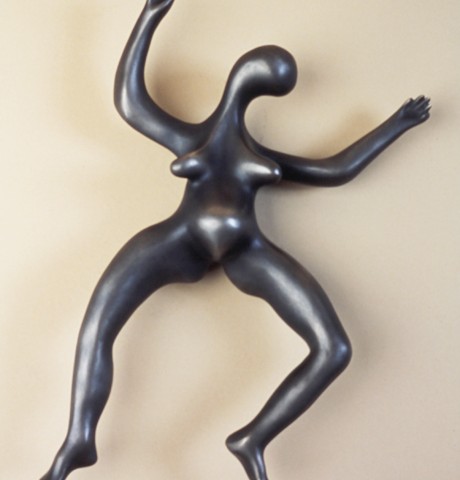 RECLAIMING THE SACRED SOURCE
PART I
by Lynn Creighton

There is nothing more important in our time than women learning who they are and what they must do.Â  All other healing of the planet will follow.Â  As women learn to devote the same energy to themselves that they have been giving to men, each other, work-place demands, family and friends, they will nourish their own growth into the fullness of their own being.Â  This is what women must do to reclaim the missing parts of theirÂ  feminine nature and remember who they are.Â  Each must do her own remembering.Â  Each must find her own piece of the puzzle, take time to remember its shape, how it sounds, what it is made of, where it belongs and what she is meant to do with it.

Women’s history is gradually becoming known to us.Â  The time in history when the Goddess occupied the center of the circle and was honored for her capacity to create new life is being restored to women’s attention.Â  Still groping for understanding, women are beginning to see that the forces that caused repression and servitude at the time in pre-history when the Goddess died feared the power of energy emitted from the priestesses who surrounded and served the Goddess.Â  Women’s ability to create life anew and the energy that generates that power was feared. 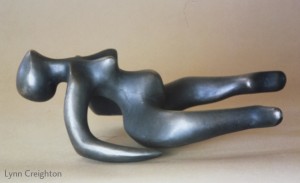 Sexual energy is the catalyst for these powers.Â  Sexual energy is what was repressed.Â  It is this sexual energy that must be reclaimed.Â  It is orgasm that connects the sacred with the profane and through orgasm that women will once again find their right relationship with life and all living things.Â  As women lift the veil of suppression and look at their own nature, we find a form that has been blessed with the sacred potential to create life, to perpetuate through our own chemistry the blessing that was given when life was given.Â  As women identify with their own history and the long repressed knowledge and energy of the Goddess, they remember the sacredness of their creative ability.Â  It is this moment of repression of women’s essential energy that I want to consider here-

Why is it that for six thousand years women have forgotten and men have not honored and protected the sacred process of recreating?

At the end of the Ice Age, the wandering hunting people in male-centered cultures followed the animals as the ices receded and the grasslands extended northward.Â  These aggressive horseback riders, who took little time to develop their spiritual aspects or their sexual beings, lived an unsettled life following the migrating herds.

Other tribes remained in the Southern regions and settled into agricultural communities.Â  These Goddess-worshipping cultures, particularly those identified by Marija Gimbutas in her comprehensive study and reports of Eastern Europe1, were peaceful communities, living in areas chosen for beauty and proximity to water and cultivable soil.

There were no fortifications or weapons.Â  They organized activities of life around successful agriculture. Women’s ability to create new life put women at the center of the culture where she served as a metaphor for all re-creation, growth, welfare, comfort, and the abundance of the people.

As ten thousand years passed and the time of the Upper Paleolithic gave way to the Neolithic, the hunters came 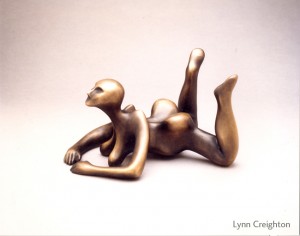 At the time of the interface of the hunting tribes and the settled agrarian cultures, damage was inflicted upon women’s sexual nature.Â  This is what I am concerned with.Â  There is plenty of evidence that the worship of the Goddess was a worship of female sexuality.Â  After the invasion from the north, references to this worship vanished and the serpent, once a symbol of feminine potency, became a symbol of evil coming out of the earth to be feared and maligned.

The blow to the sexual nature of women came as the Northern invaders attempted to satisfy their sexual urges with the priestesses of the Goddess.Â  These women had been celebrating themselves as sexual beings for eons.Â  Sexuality had been a sacred function.Â  These Goddess-worshipping societies sanctified orgasticness as a means of access to higher power.Â  I believe the spirit, the soul, the creative life forces energy were all contained and revealed in the orgasm and known to be the intended function of orgasm.

This view of sexuality existed outside the range of experience of the horseback-riding Northerners.Â  When their own sexual urges led them to the women of the subdued cultures, the intensity of the sexual energy coming from the priestesses threw them off balance.Â  Their reaction was to contain and destroy the energy which threatened them.Â  The ancient Goddess-worshipping cultures were completely disrupted in the process.

Women suffered the loss of their precious gift.Â  The sacredness of orgasm was destroyed.Â  Ever since, women have lived without knowledge of their function of connecting the mundane and the sacred through orgasm.Â  This suppression placed a straight-jacket of ignorance on women’s sexuality as the bevies of Goddess-worshipping priestesses were forcibly separated and women were denied the opportunity to reinforce and support each other’s experience and knowledge.Â  Unable to access the nourishment they had provided each other when they worshipped the Great Goddess together, the link to their creative function was broken and couldÂ  not be re-connected.

The Northern men were ignorant of the importance of these women’s role of establishing and maintaining the link between the sacred and the profane through orgasm.Â  This suppression caused the umbilical cord that had connected the women to the Goddess to be severed.Â  Gradually, women forgot who they had been and the part they played in keeping the communities relationship to spirit open.

Small eruptions of remembering were stamped out: witches were killed, the sacred groves were cut down, the Bible was re-written again and once again until all traces of women’s knowledge were eliminated.Â  The Gnostics, a sect which tried to perpetuate Jesus Christ’s teaching that women were sacred and equal, were discredited and dissolved by more powerful Christian groups.Â  Today, most women know themselves as needy and dependent, required to manipulate a system in which they feel otherwise powerless. 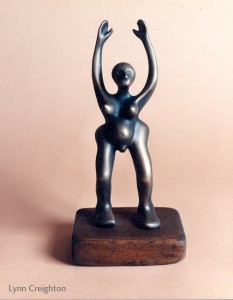 The Goddess figures you see on these pages emerge through my hand in the clay and come from the place where my heart knows this truth.Â  They are celebrating their own sexual nature.Â  Women must seek this place inside themselves that still remembers the sacredness of their own sexuality and the way in which the fullness of their own being is activated by the source.Â  Through that celebration, confusion about who they are and what they are meant to do will vanish.

I believe the trigger that will release women into their rightful role in our culture is sexual energy.Â  Women need to experience themselves as sensual and sexual in relationship to the requirements andÂ  possibilities of their own bodies, apart from their relationship with men.Â  Women will know the fullness of their won sexuality through self-pleasuring, a natural activity of all small children, one that must be allowed so that sexual nature can mature.Â  From that place of knowing themselves, women can do the work of women, which is to make the connection to the sacred for everyone.Â  Through women’s determination and intent to see and be themselves as sexual beings, humankind will be led to a place of balance and harmony with everything that is.